Runaway: The Daring Escape of Ona Judge, written by Ray Anthony Shepard, illustrated by Keith Mallett, published by Farrar, Straus and Giroux (Byr), is an Honor Book in the Books for Younger Children Category.

Runaway: The Daring Escape of Ona Judge is the unique, poetic biography of Ona Judge, a biracial slave separated from her mother as a child to toil in the Philadelphia household of George and Martha Washington. Its visual and textual narratives open and close the book with Ona’s daring self-emancipation. A third-person narrator describes her work in small vignettes that each end with the rhetorical question, “Why you run Ona Judge?” This repeated inquiry presumes she had no reason to run away given her “privileged” life and work. Yet the accompanying fabric collage paintings debunk any such notion with the reality of her world over the years. These rich, poignant images enable readers to identify with Ona, lending clarity to the reality of slavery–even in the home of the powerful, white first president of the United States. This is particularly evident in the final, double-page spread (and cover) illustration that powerfully portrays Ona in a posture of inner strength, determination, and hope as she travels by boat toward freedom. 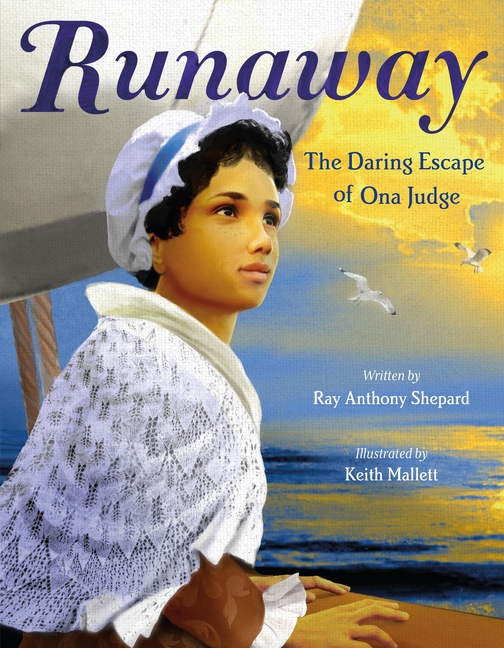